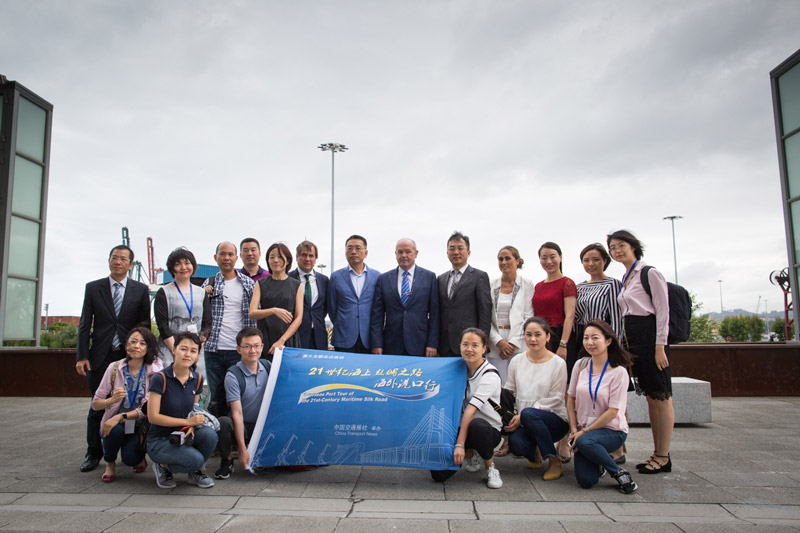 This August saw the visit of Chinese press at Bilbao port. An entourage of 17 journalists from the Asian giant, representing eight media outlets, visited the Bilbao port facilities to find out more about their competitive advantages. It comes as no surprise that Bilbao is postulated as “a prime location to become the meeting point between China and Atlantic Europe”, as remarked by the president of the Port Authority, Ricardo Barkala, during the reception.

Chinese media interest has been piqued by the 2017 entry of Cosco Shipping Ports Limited as a shareholder of Noatum Ports, the managing company for Bilbao Port’s container terminal. Cosco is the second-largest terminal operator in the world with headquarters in Hong Kong. Therefore, also in attendance at the press meeting was Sun Kai (CEO Noatum Ports), Qin Long (Deputy CEO of Noatum Ports) and Elvira Gallego (General Manager of the Bilbao terminal).

The precise idea involves taking advantage of this economic participation to make Bilbao a location with a stronger connection to Asia. According to data provided by the Port Authority, China is already one of the twelve most important markets for Bilbao Port and the second most important for containerised traffic, behind neighbouring United Kingdom. The main Chinese ports linked with Bilbao are Shanghai, Ningbo and Tianjinxingang, accounting for 71% of import traffic and 29% of export of all types of goods.

All these data have been provided to the Chinese media to stress Bilbao’s “excellent geographic location” to be an intercontinental location. The presentation extolled Bilbao as a leading port in the Bay of Biscay, thanks to being the first state port with a connection with Atlantic Europe and the United Kingdom.

According to Barkala, “Bilbao is a multi-purpose port, which has terminals to cater for all kinds of goods and with the capability to develop new traffic”. These qualities make it an ideal alternative to the congestion often registered at other European ports. According to the president of the Port Authority, the entry of Cosco Shipping Ports Limited bears testimony to the port’s characteristics as well as its investment programme to make it more competitive.

The Port Authority of Bilbao already travelled to Shanghai last May to attend Transport Logistic, one of the leading transport and logistics fairs in Asia, where it is also stressed Bilbao’s already cited excellence as a strategic port.

Representatives highlighted how Bilbao is a “constantly evolving” port during the meeting, with the investment of more than 3.5 billion euros, thanks to the public-private collaboration and its considerable margin for growth.

It is therefore worth highlighting how Bilbao assets also include modern facilities and top-of-the-range port equipment. A combination that has won over China and that we at Prosertek have also contributed to with equipment such as fenders, quick release hooks, bollards, gangways, passenger access gateways and berthing support monitoring systems.