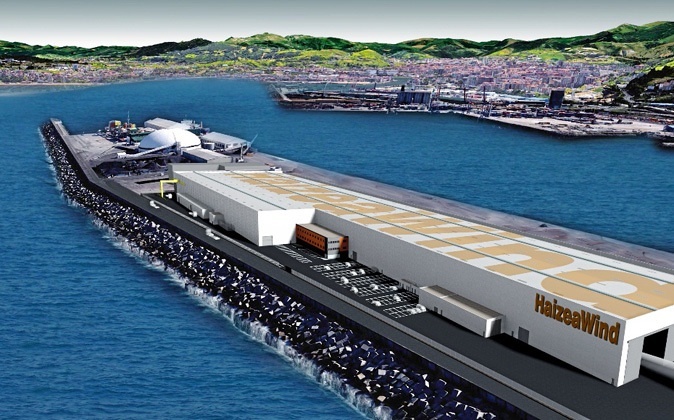 Construction has already begun on the wind tower manufacturing plant for offshore facilities in the port of Bilbao. It is calculated that the investment to build and start up the plant will be around 55 million euros, and it is expected to generate between 250 and 300 jobs.

The complex, which will begin operations during the first quarter of 2018 under Haizea Wind, will occupy 48,800 square metres, with a large main warehouse, a services building and another attached administrative building.

The plant will be able to manufacture approximately 180 offshore towers per year, or 540 lengths per year (since the standard offshore towers will be made of three lengths and production is measured in tower lengths). The large size of these parts was, indeed, the determining factor when selecting a location near the docks for their manufacture.

The Port of Bilbao’s projects

Under the Port Authority’s investment plan to activate start-up of logistical-industrial projects to draw traffic and create jobs, and to create resources and wealth for the zone, this initiative reinforces the expansion of the thriving Basque wind industry, as well as the establishment of the Port of Bilbao as a port specialised in projects.

Bilbao is a port specialised both in large parts, usually called special projects or transports (in 2016, 4,480 pieces of this type were loaded in this port), as well as the power industry. Haizea Wind is joining companies from the wind industry that are already installed next to the dock, and will be investing 37.4 million in industrial equipment and start-up for the manufacture plant and exportation of offshore wind towers and other components.

The size of the offshore towers

Wind towers are one of the main elements of wind turbines, consisting of three blades, a nacelle and a tower. Other large-sized pieces used in offshore wind farms can be manufactured at the plant, such as transition pieces or monopiles. Since the main raw materials are carbon steel plates, steel flanges and other internal and mechanical elements, it is calculated that around 65,000 tonnes of heavy plate and 7,500 tonnes of flanges may be ordered from nearby factories.

With a diameter of up to 8.5 metres, each length for these towers can weigh around 400 tonnes and be 50 metres long. When the lengths are joined, the pieces often exceed 90 metres, which means that they need to be manufactured at a site next to the dock. This is one of the reasons that led the project to the Port of Bilbao, along with the fact that the location means they can also be competitive in manufacturing onshore wind towers, flexibly adapting to demand.