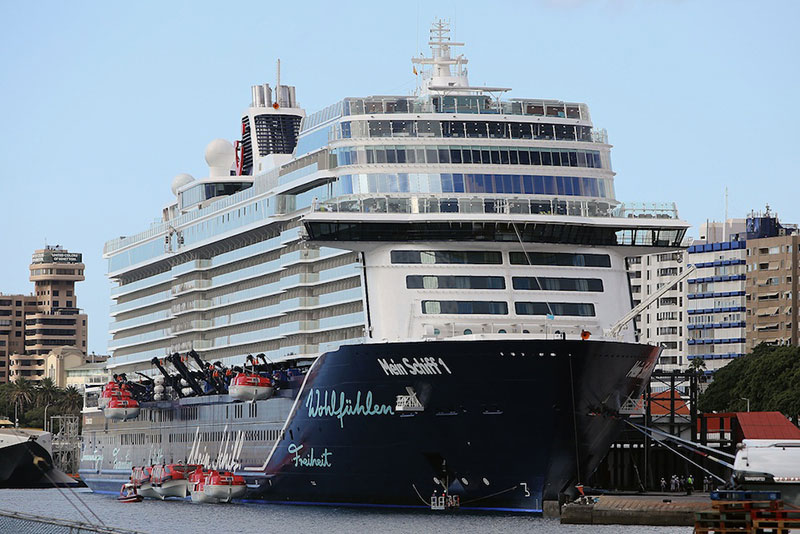 Two new mobile cruise ship passenger boarding bridges, manufactured by Prosertek, have been unveiled at Tenerife Port. These two footbridges facilitate transit between the port and the ship, speeding up port management and attracting cruise traffic to Tenerife port.

This was what it set out to achieve, with the works forming part of the work taking place at the terminal to turn it into a base port, moving beyond its current role as a stop-over port. The Santa Cruz de Tenerife Port Authority is involved in implementing several infrastructure upgrades in this regard and the design of the new maritime station includes the installation of two passenger boarding bridges or “PBBs”.

This investment aims to energise cruise tourism, being able to properly cater for the transit of passengers as entailed by this type of activity. These two footbridges guarantee an infrastructure that is both operationally efficient and attractive to cruise passengers.

These bridges facilitate the direct connection from the maritime terminal to the vessel with a top-of-the-range technical design. Both bridges are composed of an entrance, an intermediate and a final module, which are connected by 2 tunnels. These elements are supported by two towers containing eight steel wheels, four of which are motorised, enabling them to move and travel along the quay with the corresponding steering systems.

They also have a lifting mechanism that facilitates the vertical movement of the tunnels and modules to accommodate the different heights of the ship entrances, as well as tide conditions. The two tunnels enable multiple lifting operations to facilitate this task. The final module can also imitate the movements of the vessel on the three shafts, thanks to the rotation, elevation and telescopic system of the end section.

Its construction guarantees resistance and resilience to external elements and environmental conditions.

Both platforms have been supplied by Prosertek, experts in port equipment, as reaffirmed by the recent success of the footbridge at Bilbao’s cruise terminal, which received considerable praise in the sector thanks to their innovative design.

Work has been undertaken to have everything ready in time for the 2018-2019 cruise ship season. And one of the footbridges was launched on 14 September this year with the docking of German cruise ship “Mein Schiff 1”, which made its second stop-over at Tenerife port. And so the 2,879 passengers of this large ship were the first to enjoy this new way of boarding at the port.

Tenerife port hopes to become a stronger contender as a terminal for cruise ships, thanks to the renewed status these footbridges. This return is not just seen at the port and is also significantly beneficial for tourism, given the large numbers of passengers travelling on cruise ships and who avail of the different tours to visit the island.