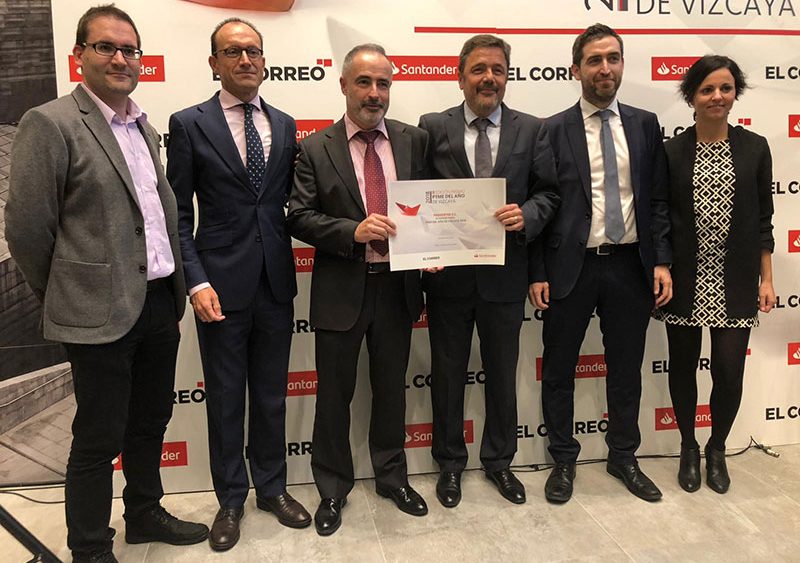 Prosertek was recipient of the “Best SME 2018” award for Bizkaia as part of the prestigious awards, organised by Banco Santander and the Bizkaia Chamber of Commerce, on 23 October last. This award recognises the performance of small and medium-sized enterprises, whose activity is essential for the generation of employment and wealth.

Now in its second year, the biggest award this year went to a leader in the port equipment sector, Prosertek. This was therefore recognition of the contribution made by our company to the creation of employment, as well as its commitment to breaking into the international marketplace and its innovative projects by the jury, in conjunction with the Spanish Chamber of Commerce, the Regional Government of Bizkaia, Banco Santander, Banco Popular and El Correo.

Apart from the main award won by Prosertek, three other companies forming part of the Bizkaia business network were awarded runner-up prizes, also recognising their hard work and work as generators of wealth and employment from the SME sector. Fanox Electronic won the runner-up Internationalisation award, One Way Liver received the Innovation and digitisation award while Urbegi Ingeniería de Procesos y Manufacturas won the Training and Employment award.

Despite being new, the undeniably relevant SME awards were created 2017 with the aim “of recognising the work of small and medium-sized businesses as the generators of wealth and creators of employment in the course of their day-to-day work”, in the words of the Spanish Chamber of Commerce. The award basically recognises the hard work of the companies that make up the productive network of each territory, in this case, Bizkaia.

The awards are actually organised by province, each of which have a jury headed by the local chamber of commerce, which selects a “SME of the year” and three runners-up in the Internationalisation, Digitisation and Innovation and Training and Employment categories. This is the result of a detailed study of the nominations and the activity of the contending companies. Competition is fierce, with about 600 nominations taking part across Spain this year.

Therefore, this major recognition does not end here, rather opening the door for Prosertek to compete with the best SMES from all over the country in the finals that will take place in the first quarter of 2019. This event will once more showcase the excellence that exists in the field of small and medium-sized enterprises, which has a major impact on our economy.

An important role, to represent small and medium-sized enterprises from Bizkaia, which we at Prosertek take on with the enthusiasm and confidence that a good job allows us to have. Work that is evidenced over more than 20 years providing top-class port solutions for both domestic and international markets, where innovation is always our main focus.